I’ve been to the Big Apple several times over the years, but it was always on business. Yes, I managed to add a weekend at the tail end of the business trips and get out and see the sights but I always ended up frustrated at seeing only a tiny part of this amazing city.

So with three friends from work, we decided to spend a long weekend : 4 days just being tourists and exploring to our hearts content!

We were leaving on a morning flight from Charles de Gaulle airport so I unfortunately had to get there early. I decided to Uber it as I love their service.

We landed at 2 pm in Newark, which is not my favorite airport but the tickets were cheaper that way.

A shuttle bus awaited us and took us to our hotel the Chelsea Comfort Inn. It’s in a great location next to Madison Square, which makes up for the fact that the rooms are small (but that’s to be expected in NYC) and the decor is dated.

We wanted to make the most of our stay, so we barely took the time to drop off our bags, freshen up and out the door we were!

It was slightly drizzling when we set off, but that didn’t discourage us. We took the subway to get there.

We passed by the New York City Hall, constructed in 1810 which is the oldest city hall in the United States that still houses its original governmental functions. We just had to take a few pictures of the classic NYC Squirrels!

We immediately went up to the Freedom tower now called One World Trade Center to buy our tickets as we had a feeling the visibility wouldn’t last.

As it was we asked prior to purchasing and the vending lady told us we would get a three mile radius view which was a lot better than this very morning where there was zero visibility. The tickets cost 32$ for 1 adult and the Observatory opens at 9 am and closes at 8pm. The last ticket is sold at 7:15 pm. 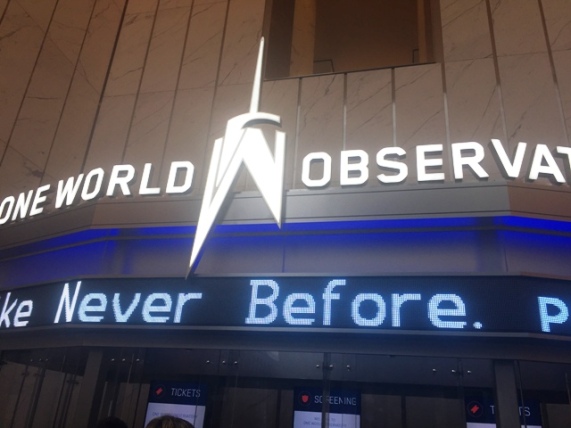 As you head towards the elevators, you are greeted by the Voices and video clips of all the workers that participated in building this amazing skyscraper. You also see the foundations and the very bedrock on which the One Word Trade Center is built.

At 1776 feet/541 meters high, it’s the tallest skyscraper in the Western Hemisphere and the current 5th tallest in the world. It’s height in feet is a reference to the year the Deceleration of Independence was signed. We took the elevator, or should I say Sky Pod, up the 104 stories to the top floor On World Observatory deck. The ride takes less than 60 seconds and your stomach will drop in your heels for sure! The elevator floor, walls and ceiling turn into a screen where we got to see a time lapse animation of the development of the  skyline of New York starting around 1500s all the way up to 2015 as we climbed up. It’s really cool as actually you feel the pulse of the city as it develops before your eyes! 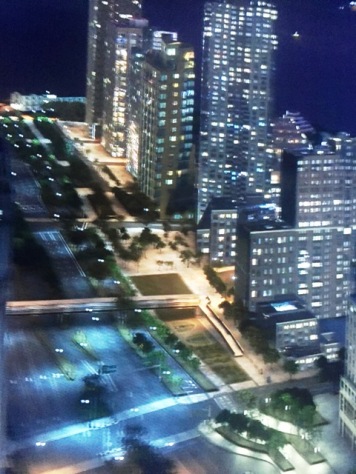 When you exit the elevator you are taking in front of huge windows and expect to see the stunning views ! But you are actually being teased, as the windows are covered in curtains upon which is projected the ‘See Forever‘ theater short 2 minute video of a 3D New York city and how great it is. You can shed a small tear if you are a US citizen or you can smile if you are a foreigner, all depends on your point of view :). Then the curtains dramatically rise and you are confronted with the vista ! All very show business-y. 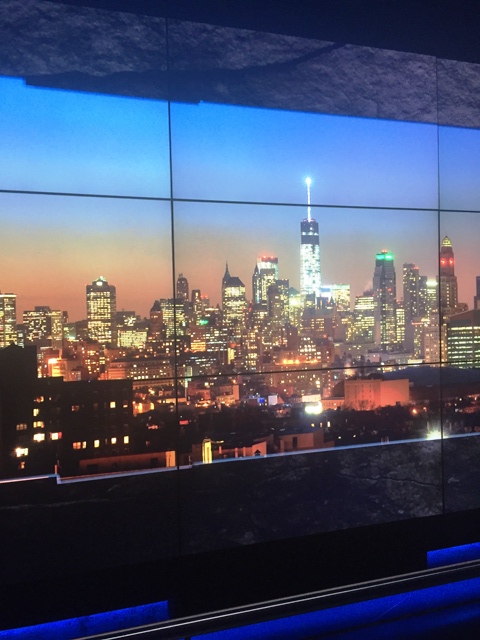 Then we were finally ushered onto the actual Observatory. It’s  360° and truly breathtaking. I wish the weather had cooperated a little more but even with poor visibility you are still impressed with how high up you are and all you can see. 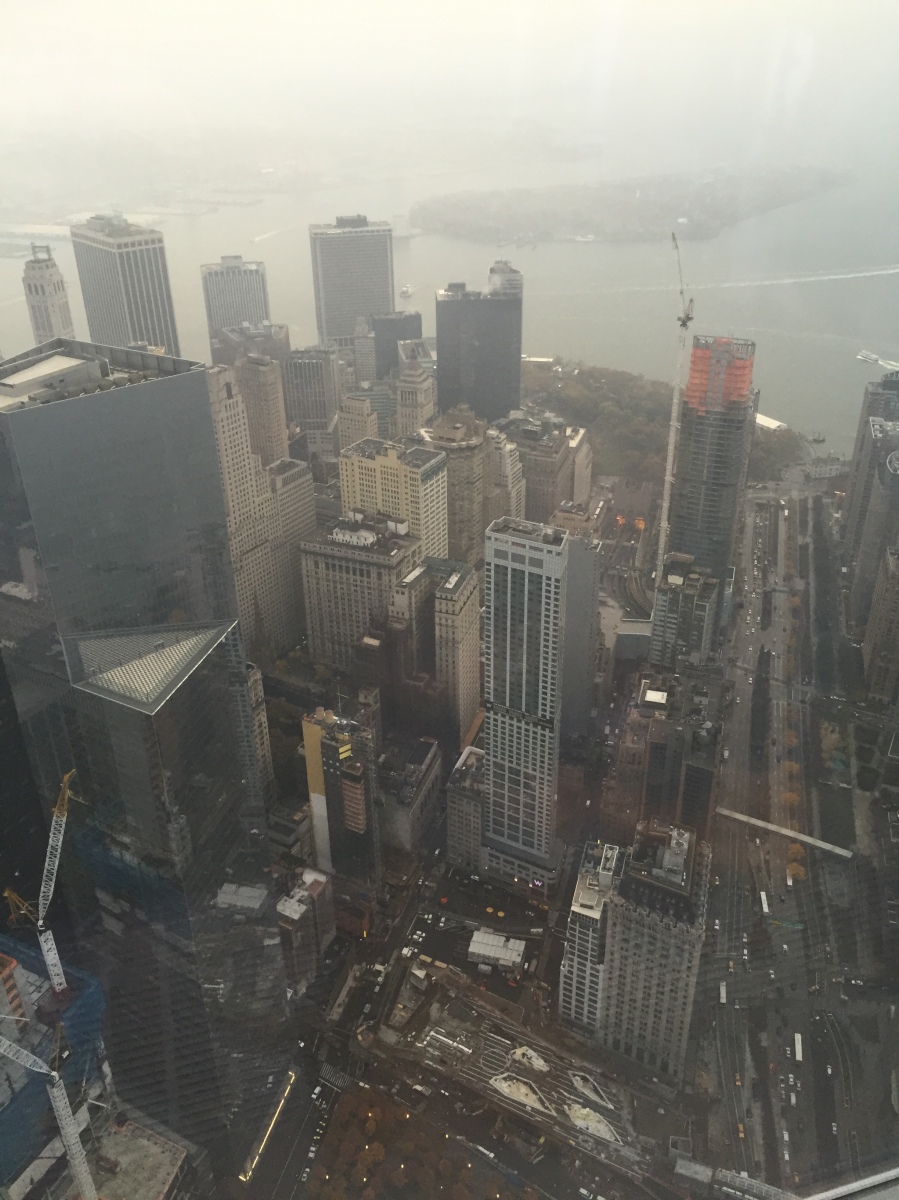 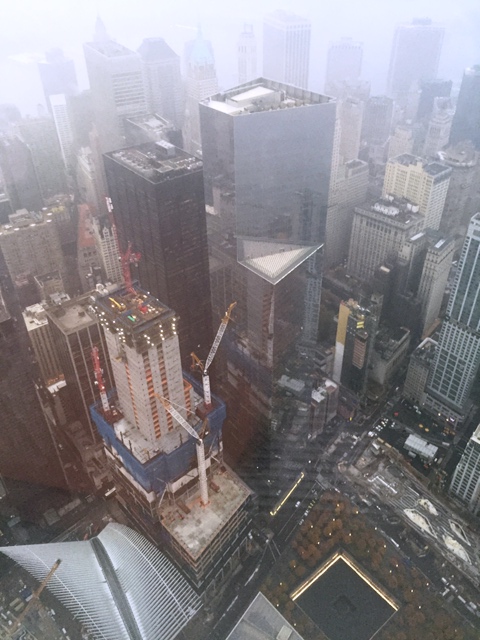 The Observatory has a Sky Portal which consists of a 14 foot wide circular disc which delivers views of the streets bellow with HD real time footage of the streets bellow. I didn’t think it was all that special as I prefer simply looking out the windows at the view that doesn’t need any help being gorgeous.

It also sports a ‘City Pulse‘ attraction where a skyline concierge is surrounded by a ring of HD monitors that show you the city attractions thanks to gesture recognition technology. I liked this better especially if as I didn’t want to rent the iPad ‘One World Exporer’ that gave visitors an interactive detailed explanation of the skyline view.

The Observatory also had the necessary gift shop and a couple of restaurants.

We got our picture taken in front of a green screen and had the skyline superimposed behind us. From the deck we were able to see the 9/11 Memorial. 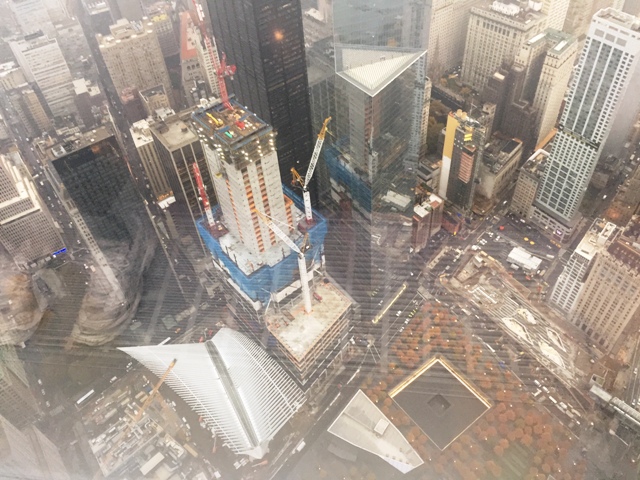 The clouds all of sudden ate up all visibility, but we had seen and taken all the pictures we needed so we decided to take that as our cure to leave and head to the Memorial.

The 9/11 Memorial is beautiful and heart breaking at the same time. When you stand by the fountains or water falls and pools made on the exact location where the old foundations of the Twin Towers stood, you do feel the emptiness and loss keenly. It’s name ‘Reflecting Absence‘ perfectly covers the feeling. The pools and water falls are the largest ever made by man in the USA. They are actually 30 feet/9 meters bellow street level. 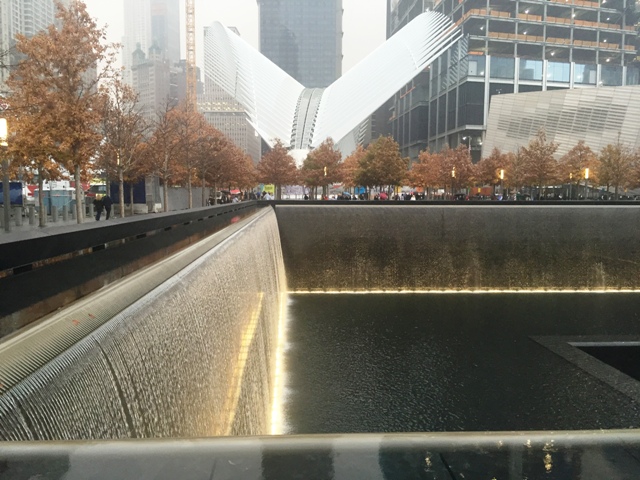 The names of all of the 2 977 victims are etched in bronze plates along the stone boarder of the pools. The names are arranged according to an algorithm, creating “meaningful adjacencies” based on relationships—proximity at the time of the attacks, company or organization affiliations. According to Edith Lutnick (executive director of the Cantor Fitzgerald Relief Fund), “Your ‘loved ones’ names are surrounded by the names of those they sat with, those they worked with, those they lived with and, very possibly, those they died with.“

The water falls were designed to mute the city sounds and lend a contemplative nature to the sanctuary. The reflective nature is further enhanced by the 400 white oak trees planted on the Memorial Plaza.

The most famous tree on site, is the Survivor Tree a callery pear tree recovered from the rubble badly burned and with a single living branch. It has become a symbol of hope and rebirth.

After a very moving visit, we decided to explore lower Manhattan and walk around the financial district to visit one of the most famous business neighborhoods around the world and get back to very practical matters.

On the way there we came across the Century 21 store. I just had to go in quickly and see if I could find a bargain deal.

Wall street itself is a quite small street, you expect something more grand with all the things the name calls to mind. 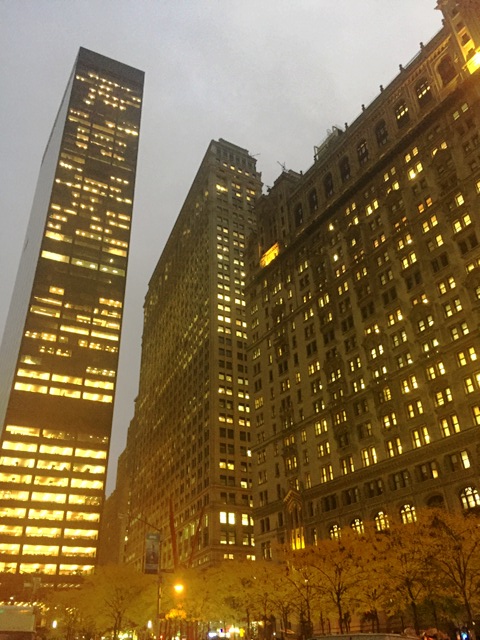 We admired the New York Stock Exchange building. The actual American Stock Exchange traces its roots back to the late 1790s. It’s crazy to think that in the 1800s, businessmen would gather on the corner of Wall Street and Broad Street to trade securities issued by the US Government. Brokers and clerks stood out on the street in all kinds of weather and since they had a hard time being heard over the surrounding din, they developed hand singles to communicate which continue on to this day. In 1921 they finally marched inside a building at 86 Trinity Place to the sound of the Star Spangled Banner. In January 2009, the New York Stock Exchanged acquired the American Stock Exchange and its data and content was integrated into the NYSE Euronext.

We walked by Trinity Church which has seen three different churches constructed over each other starting from 1698 and ending in 1846. At that time its 281-foot (86 m) spire and cross was the highest point in New York at least for the next 4 years until the New York World Building took over on race that has thrived through the decades to this very day. The Freedom Tower is the highest NYC building currently.

We also stopped by the Federal Hall National Memorial was built in 1842 over the location of the Fedral Hall built there in 1700 as New York City’s first City Hall. It later served as the first capitol building of the United States of America under the Constitution, as well as the site of George Washington‘s inauguration as the first President of the United States. It was also where the United States Bill of Rights was introduced in the First Congress. The building was demolished in 1812.

Nowadays, the Federal Hall National Memorial  is operated by the National Park Service commemorating the historic events that occurred there. We admired the statue of the George Washginton.

After all the walking around for the better part of the afternoon, and let’s not forget the 7 hour flight, we were getting tired and hungry. What better dinner to eat than a classic New York style pizza? We went along with a guide recommendation and were not disappointed.

The restaurant was nice and cozy. It’s a casual pizzeria with thin-crust pies & outdoor seating on historic, cobbled Stone Street. The pizza was truly delicious, with a side of Caesar’s Salad and what else could we order for desert besides the Famous NYC Cheesecake of course!

After feeling restored, we set off to Times Square with renewed energy. Times Square is a major intersection and neighborhood in Mid town Manhattan at the junction of Broadway and 7th Avenue. We just couldn’t pass up a visit, even if I go there every time I’m in NYC.

Upon seeing the huge H&M Balmain signs, I told my friends I had to see what was left of the much anticipated, over hyped ? collection that had come out that very day! Alas, but not surprisingly nothing much was left in the little sectioned off VIP Balmain area on the second floor of the H&M store.

We admired the 1926 art deco Paramount Movie theater building which started out as a movie theater before becoming a popular live performance venue. It was then converted into office building space in 1964.

We then just had fun taking in the sights, and street entertainers. We visited the Nike Store, the Swatch store and the M&M store. 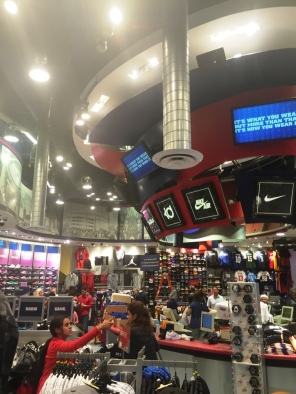 I even dragged my friends into Walgreens because I had some drugstore makeup to purchase for my NYC Drugstore Haul post ;). 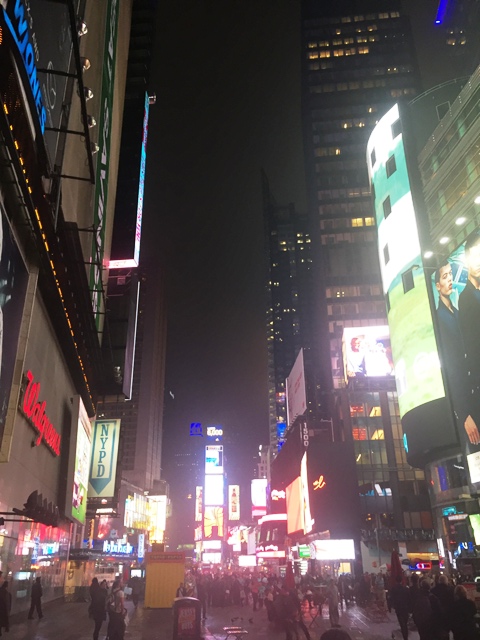 After taking in the busy atmosphere and all the lights of Times Square even the mighty NYC pizza energy had worn off and we decided to turn our poor jet-lagged bodies back in to the Hotel for a much deserved good night’s sleep.

Have you ever been to NYC?