The next day I decided to wake up not too late in order to make the most of my stay in Romania. After a hearty continental breakfast at the hotel, I decided to get real about seeing the culture and visiting the Bucharest museums.

The first one the list was the National Museum of Art of Romania. It is located in the former royal palace in Revolution Square, central Bucharest, completed in 1837. The palace is beautiful and grandiose. It was built by a French architect Paul Gottereau. It’s also really big with no visible entrance points  ! I had to walk around the whole thing for like ten minutes to try and get in. Finally a cute little old lady took pity on me and spoke to me in very good French showing me the entrance through the side of the building. A sign showed the opening hours and apparently in Romania, museum workers don’t like to get up early either ! It would open only at  11 am on the weekends !

I decided that my aggravation needed more coffee and headed across the Victoria Street or Calea Victoriei to the Athenee Palace Hilton Bucharest hotel cafe. It turned out a lot of stars and VIPs also stopped by for coffee, their pictures splashed on the walls leading to the cafe.

Once restored to good humor, I was ready to start the museum visit. The museum features collections of medieval and modern Romanian art, as well as the international collection assembled by the Romanian royal family. I decided to buy a comprehensive ticket permanent collections and exhibitions all in one. After all, when might I get the chance to return? I wanted to make the most of it.

Unfortunately we weren’t allowed to take any pictures. I love art and the paintings were very impressive. I though the museum would be smaller, I guess, or host mainly local artists but it really covered European art quite well starting from around the 15th century. Here are a few pics I was able to sneak past the guards. Sshh! (I didn’t use any flash, don’t worry).

After a great visit, it was lunch time. We didn’t have the opportunity to test another local restaurant because the Palace of Parliament visit was scheduled at 1 pm. As we were hoofing it, I decided to get something on the go. What better idea than to stop at a local bakery on the way ?

The pastries were very good, you could find both sweet and salty. How ever once again not very light. The sales person was very nice and when I asked how to say thank you in Romanian, she just said : “merci” ! They understand quite a lot of French here, I was surprised. Guess I’ll brush up on my Romanian later.

The Palace of Parliament

The Palace is a good 30 min walk from the museum (that is if you don’t get lost, I have the worst sense of direction, so I got there by taking a long cut through the Parcul Izvor park). All in all 30 min is not so bad, and it seems that most of the historic Bucharest can be done by foot.

What was kind or scary was that the Palace of Parliament staff held my passport hostage for the duration of the visit. I would get it back only upon returning my pass at the exit. I didn’t like the feeling of being without my official travel documentation !

Unfortunately you can’t take pictures inside unless you pay extra. I declined so you’ll mostly see the views from the Palace. 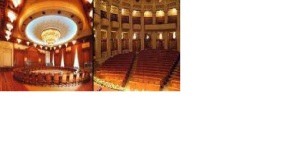 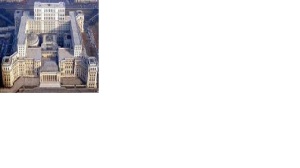 A large typical chandelier inside the Palace

A view of the Parliament from the sky gives an idea of how insanely large the Palace is. Next to it, is one of the many ball rooms for formal events. The ball room is filled with marble and the guide told us that as a local joke it is said that there no longer remains any marble in Romania since all of it is now used in the Palace!

This palace is enormous with over 1 100 rooms! There are 12 stories and 8 underground levels. We got to see a tiny part of the underground complete with survivalist bunkers. It’s the second largest building in the world after the Pentagon. I think it showcases the lunacy of the Romanian communist dictator Nicolae Ceausescu. A lot of the rooms have different styles as if he wanted to replicate foreign architecture on a whim. There is a French style room and an English one, even Asian rooms. If you believe in communism (which I don’t) how can you reconcile your values with such an OTT palace ? He wasn’t even able to use it completed because he was overthrown before construction even ended (in 1989 during the revolution) ! Construction started in 1984 and was finally finished in 1997. Many homes had to be destroyed and around 40 000 people had to be relocated.

Anyways what is kind of sad is that it’s so huge even to this day it’s underused. I saw a lot of TV crew equipment in some rooms that have clearly been  turned into impromptu studios. The guide told us that the dictator’s wife was taller than he was and when they would take the grand staircase to great any official visitors, he would have his wife stay on a step down from his so as to appear taller! There is even an urban legend that the two sided staircase is built with an optical illusion to hide the fact the side used by his wife is actually lower the Nicolas’s side! 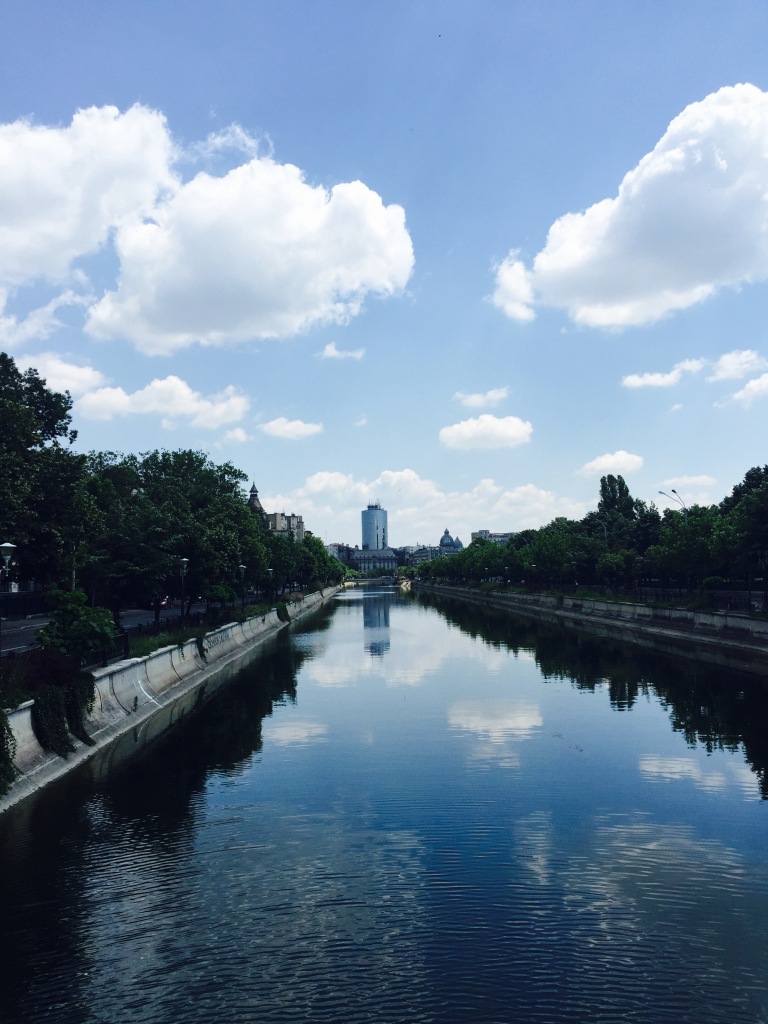 The views from one of the main balconies are gorgeous if a little too symmetrical – if that isn’t your architectural style. We only ended up seeing about 5% of the Palace and the visit lasted a couple hours. You def need a cell phone to find the person you’re meeting with haha :). Overall it was really worth seeing, but even though parts of it are beautiful it felt like it was trying too hard. There was just too much of everything.

After the visit of the Parliament, I got my passport back and decided to head out in the beautiful scenery we had seen from the balcony and stroll along the Boulevard Unirii that departs straight out from the Palace. The Boulevard follows a canal and has many trees providing nice shade. 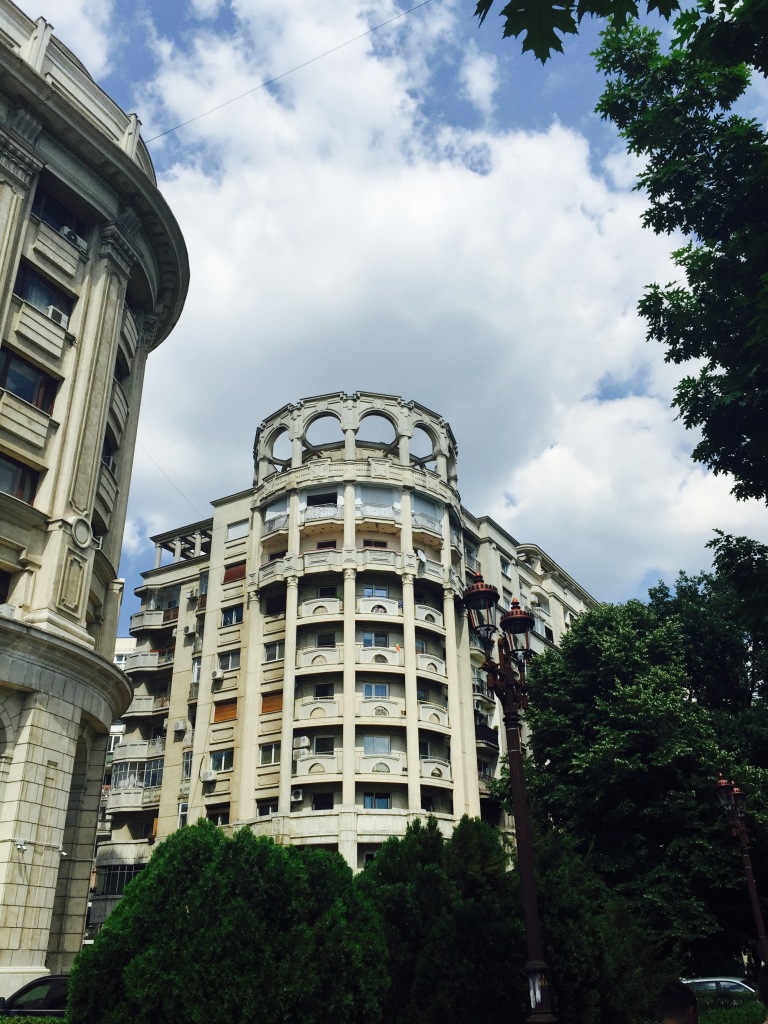 After a big chunk of the day was devoted to history and culture, it was time to carve out some shopping time ! I’m a girl after all and can’t go too long without shopping especially when you can also turn it into an anthropological experience. So I decided to go to the Unirea Shopping Center. At the end of the Boulevard was a huge square the Unirea Square with lots of fountains and artificial ponds, but some were dried up as can be seen bellow.

These wide open spaces at the beginning and end of the boulevard leading to the Palace of Parliament clearly showcases the soviet architectural style. The  Unirea Mall used to be the largest department store during Communist Romania. It isn’t pretty from the outside covered as it in in advertising. It is large with several stories high but the flow of customers wasn’t thought out properly or what is more likely the case : it seems they used an existing building to turn it into a mall. The alleys are kind of crooked and small and there is no logic to get from one place to another. But I think it lends it a very old school European charm.

A lot of brands were the regular European brands and some I hadn’t ever heard of. I did manage to get my hands on a Catrice eye-shadow that can’t be bought in the States or in France. So I was a happy camper, or should I say blogger?

After some retail therapy it was time to head back to the hotel before discovering Bucharest’s night life. Walking around the old city was fun. It was very lively with lots of people out and getting ready to have fun. There were many bars and restaurants to choose from. It was cocktail hour for sure ! 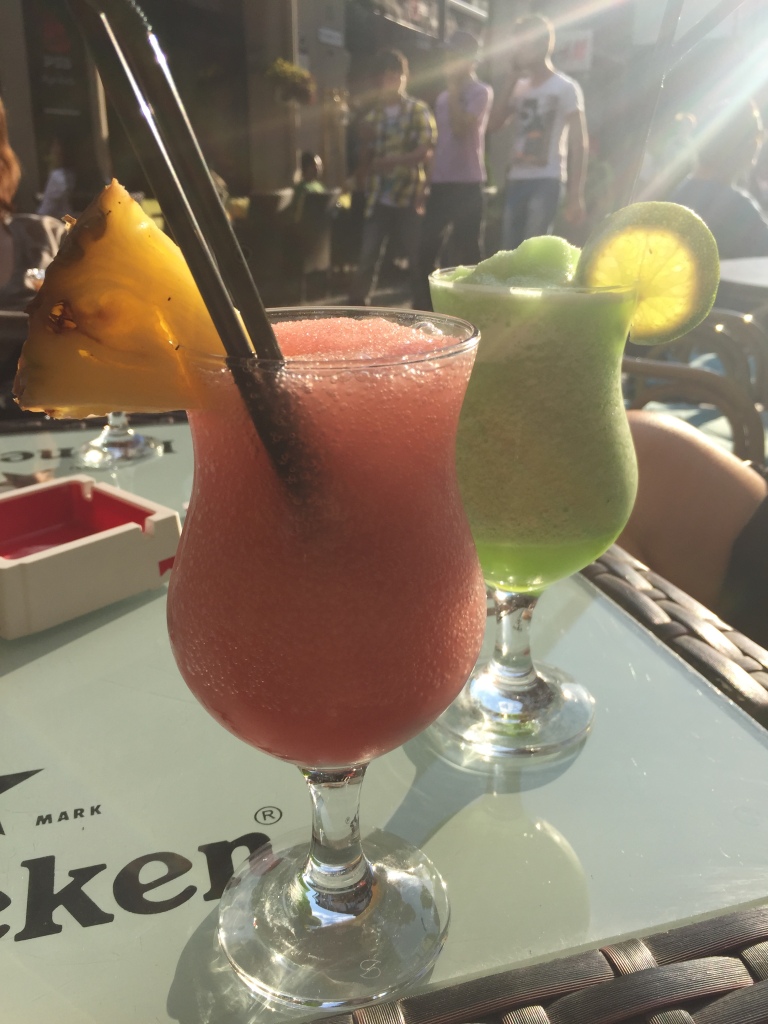 The streets all pedestrian and so it was nice to walk around. It was funny to have very staid and proper establishments right next to “red light” district type places : there was clubs and strip dancing lounges all side by side. 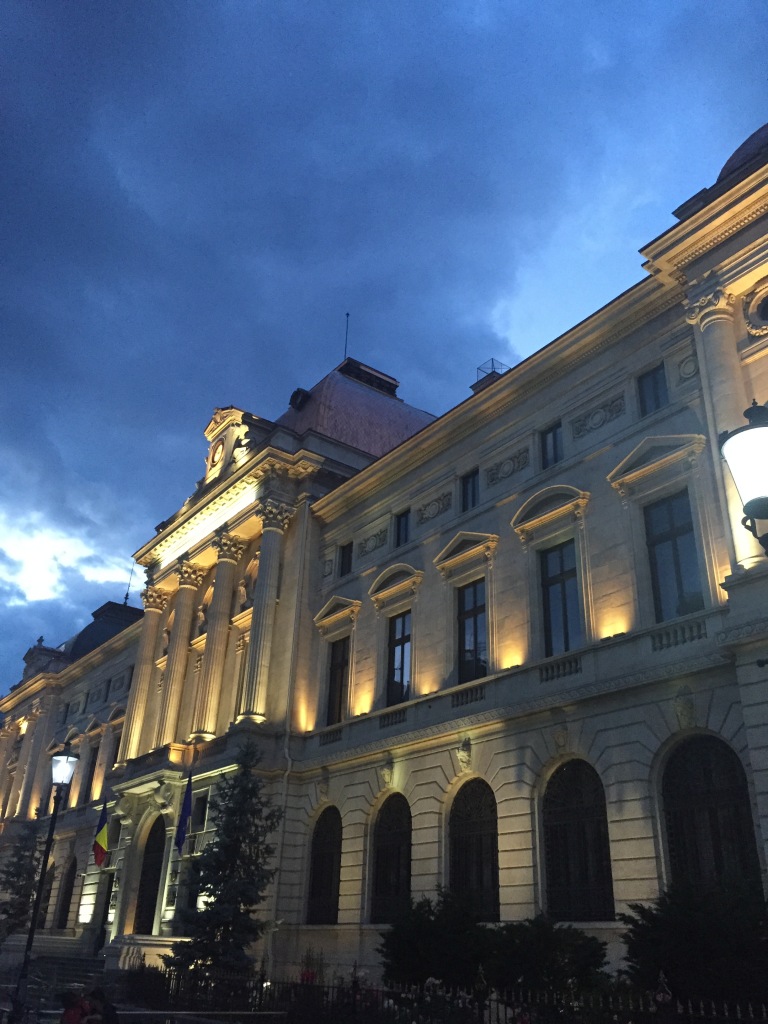 We decided to have dinner at a steakhouse in the JW Marriott Bucharest Grand hotel near the Palace Parliament. Walking there we were treated to this gorgeous view with the twilight sunset. 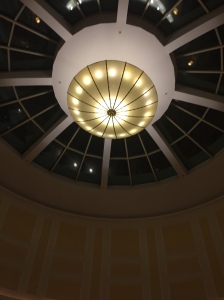 After a delicious meal, I was too sleepy to walk back and so taxied back to the hotel. It was time to head to bed and be ready for the last day in Bucharest !

As I was flying back to Paris later that day, it was important to make the most of the morning. After a quick breakfast, I decided to head over to the Village Museum or the Muzeul Satului in short or Dimitrie Gusti National Village Museum, by taxi as it is located on the outskirts of Bucharest to the north.

The Village Museum is an open-air ethnographic museum located in the Herăstrău Park, showcasing traditional Romanian village life. The museum extends to over 100,000 m², and contains 272 authentic peasant farms and houses from all over Romania. It was truly wonderful to go back in time and actually walk through a village from long ago. As you progressed the houses become more recent. I truly recommend this museum, even for those who usually don’t enjoy them. This open air one is very special and very child friendly as well.

The park is truly gorgeous, and you can rent a boat and go paddling around. I didn’t have the time but I did admire the views. 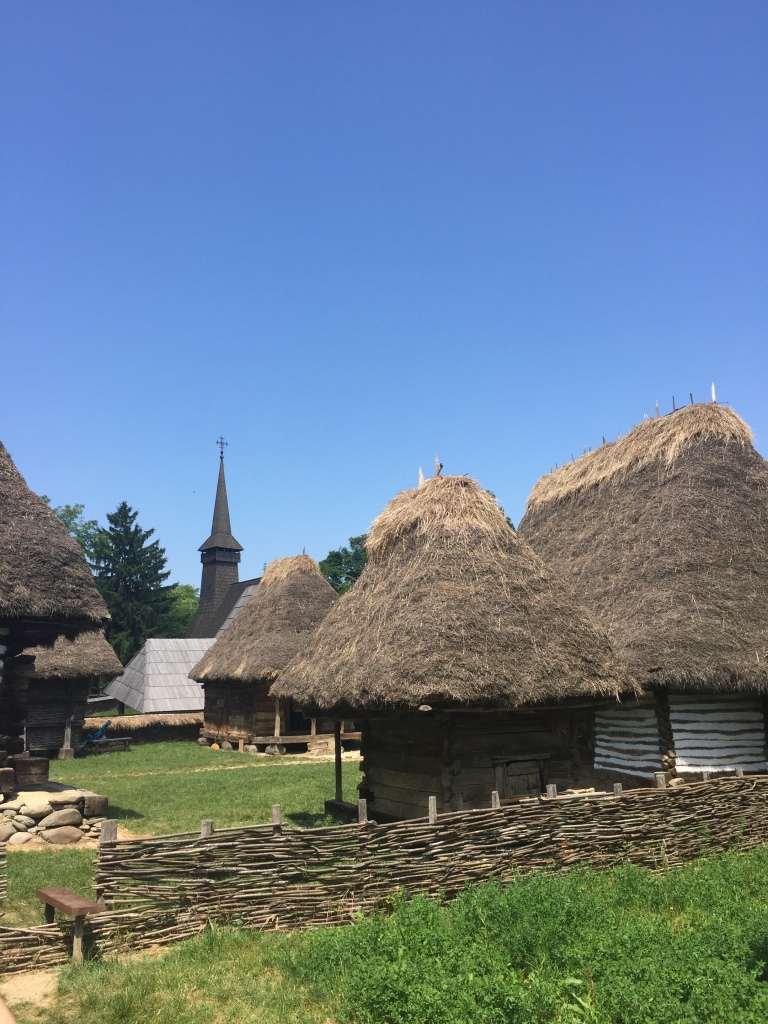 It was lunch time by the time I had made my way across most of the museum and conveniently there happened to be an open air restaurant.

On the way out we passed this beautiful windmill. It boggles the mind that they were able to take them apart and transport all these buildings to this museum.

It was time to return to the hotel and check out. How sad I wasn’t ready to leave.

I did manage to see a few things on the way back and to the airport :

Romanian Atheneum (Ateneul Roman) : This is Bucharest’s most prestigious concert hall and one of the most beautiful buildings in the city. It was built in 1888 in neo-classical style after a design by the French architect Albert Galleron. It’s a great place to hear classical music, but unfortunately I didn’t have the time.

This city is very diverse with a huge mix of architectural styles. The building bellow is the perfect illustration of my point :

It was with regret that I took my leave of this beautiful city. I found the people to be very friendly and the food quite good. I’m glad I came as the preconceived notions in my head of a heavy soviet city were completely turned around. It was the perfect weekend get away !