After sleeping in some, it was a big Thanksgiving /Bday party the night before after all, it was time for some “touristing” again. Unfortunately the weather wasn’t as cooperative and decided to be moody and downcast.

That didn’t stop us one bit, and the first thing on our agenda with the Musée des Confluences or Museum of Confluence. It is a completely new anthropology and natural science museum that opened in 2014.

It is located at the southern tip of the Presqu’île at the confluence of the Rhône and the Saône (anybody guess where the museum’s name came from yet?), and comprises part of a larger redevelopment project of the Confluence quarter of Lyon. The architectural design is in a deconstructivist style. The museum stands 44 m (144 ft) high, 150 m (492 ft) long, and 83 m (272 ft) wide. It supposedly resembles a floating crystal cloud of stainless steel and glass was created by the Austrian firm Coop Himmelb(l)au. What do you think ?

The three major exhibitions deal with the questions “Where do we come from ?, “Who are we ?” and “What do we do ?”. Tickets cost 9€. Pictures weren’t allowed but here a couple of the main hall or the “Crystal” part of the Museum which is mainly a circulation area made of glass and windows centered around a symbolic “vortex”.

Honestly I enjoyed the architecture much more than the actual exhibitions.

The Raymond Barre bow string Bridge enables the tram to bring people in from downtown Lyon. 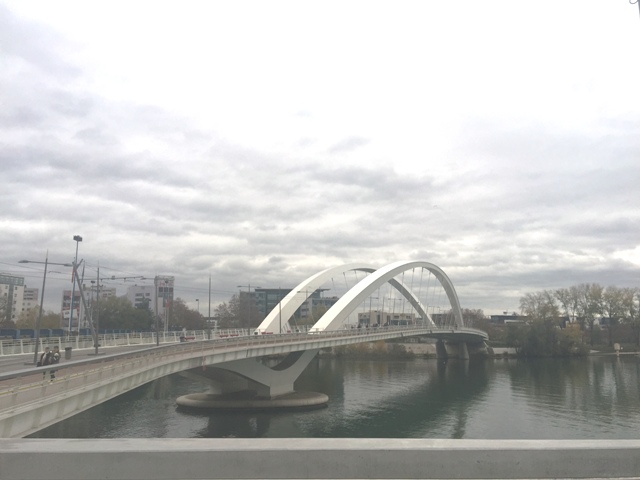 The Museum is surrounded by gardens and pools. The gardens have sculptures with the ONLYLYON logo. It’s a program designed to build Lyon’s international reputation.

Reminds me of an elephant trunc!

Pools under the Museum 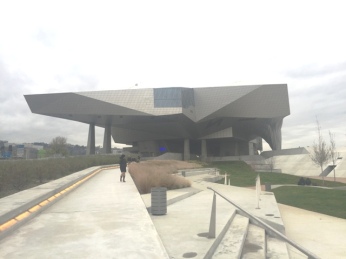 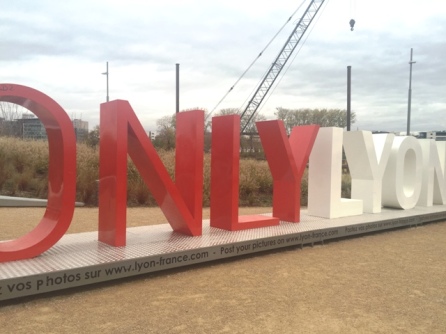 A lone swan kindly paddled up to me and posed perfectly for my scenery pic. Be sure to thank him and like this post J !

Then we took the car to see the Basilica Notre Dame de Fourvière, that sits on top of the Fourvière hill overlooking all of Lyon. The way up is pretty steep, so thank god for modern means of transportation. The view from the hilltop is stunning. 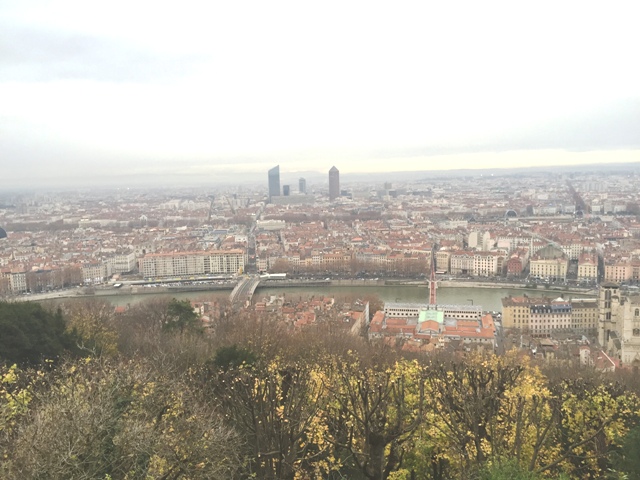 The basilica was constructed on the site of an ancient roman forum. I prefer the aesthetic of the Basilica to that of the Cathedral I visited the day before. 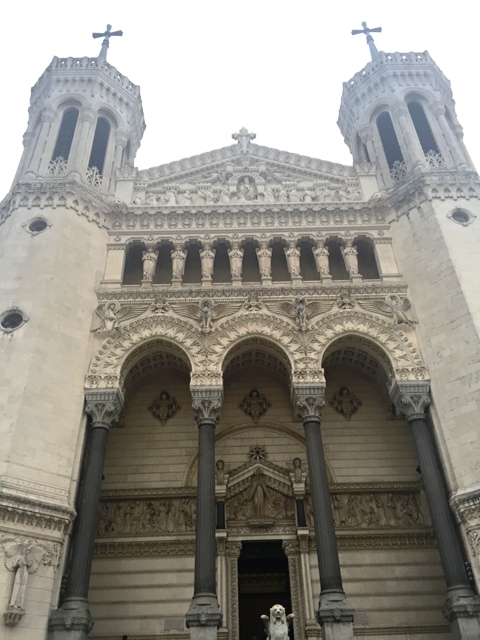 The design of the basilica, by Pierre Bossan, draws from both Romanesque and Byzantine architecture, two non-Gothic models that were unusual choices at the time. It has four main towers, and a belltower topped with a gilded statue of the Virgin Mary. It features fine mosaics, superb stained glass, and a crypt of Saint Joseph.

But the most incredible part of this basilica is the interior. Fourvière is actually pretty weird as it contains two churches, one on top of the other! The upper sanctuary is very ornate, while the lower is a much simpler design. The upper church’s beauty just blows your mind. I hope my photos do it justice but I’m pretty sure they don’t J. 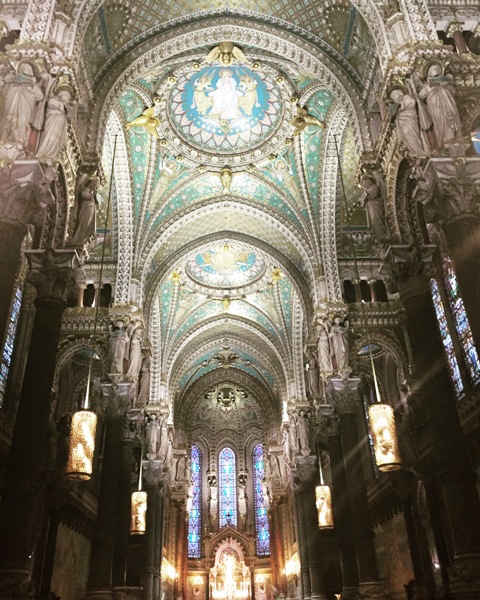 Work on the triumphant basilica was begun in 1872 and finished in 1884. Finishing touches in the interior were not completed until 1964.

Fourvière is dedicated to the Virgin Mary, to whom is attributed the salvation of the city of Lyon from the bubonic plague, the Black Death, that was sweeping Europe in 1643.

Each year in early December (December 8, day of the Immaculate Conception), Lyon thanks the Virgin for saving the city by lighting candles throughout the city, in what is called the Fête des Lumières or the Festival of Lights. Here are some pictures of the preparations for the Festival, which I was unfortunately going to miss. I’ll just have to come back at that time.

In one of the chapels beneath the Basilica, was an exhibit on the different crèches from all over the world. I love making crèches or nativity scene and that is a tradition my French family upholds every year.

On the right side of the Basilica is located the antenna of Radio Fourviere.

Since 1982 the antennas of Radio Fourvière, the predecessor of Radios chrétiennes francophones, have been located in the tower. 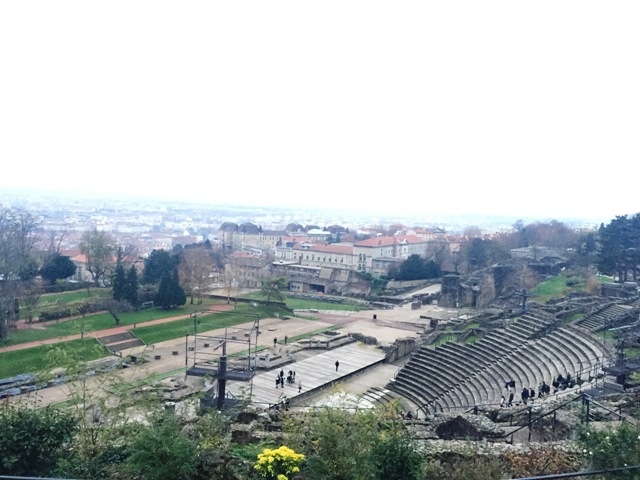 On the way back down to the city, we stopped to check out the Ancient Roman theatre built upon the flank of the Fourvière hill. Lyon was called Lugdunum in that time. It was buried in the medieval times, but restored in the 1930s. It was built in two stages starting around 15BC with 5 700 seats and then was expanded in the 2nd century. It is also a UNESCO world heritage site and holds festivals every summer.

I would love to come back for those.

Then sun was starting to set so, we then headed down city center and walked through the Place Bellecour.

We decided to enjoy some cocktails before I had to take my train back to Paris, at a rooftop bar. Who said you couldn’t combine fun and visiting at the same time?

The Rooftop Bar at the Sofitel Hotel 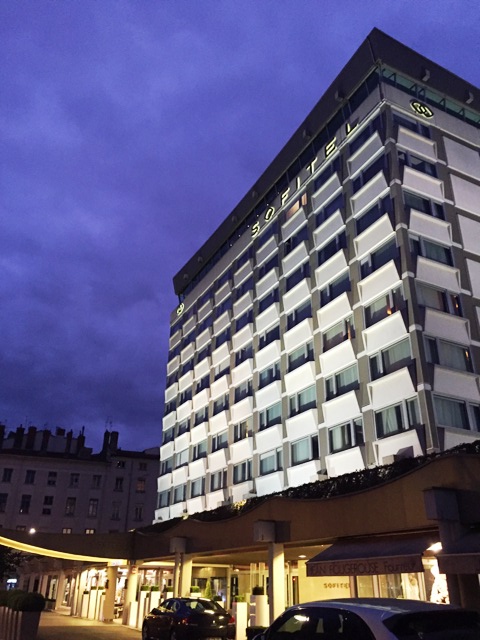 The view of the Rhone river was absolutely gorgeous at night. The university of Lyon was all lit up for our viewing pleasure.

The cocktails were really good as well and the rooftop bar plush with decadent red velvet sofas. If you ever have some time in the city and you just want to relax after a busy day, this is the place to come to !

Time flies by when you’re having fun. All too soon it was time to get on the train and back to reality! I decided to take home a little souvenir and stopped at the famous Chocolate Shop to buy the “Coussins de Lyon” or Lyon’s pillows.

What are your favorite places and things to do on a weekend?