I’ve always wanted to go to Portugal, and when I read Darly’s great post on Sintra, I decided I absolutely had to go and see this extraordinary place for myself. The opportunity came up sooner than expected.

When one of my best friends got married last June, we realized that our best friends group from high school hadn’t actually been all together for over ten years! Time truly flies by and it’s up to us to do something about it. So we all decided to have a girls trip abroad. We picked Portugal.

We chose to spend 5 days in Lisbon at the beginning of October. So I lobbied pretty hard to include a day trip to Sintra. 🙂 Here are my adventures and impressions there.

We got up around 9 am and left for the train station. We purchased our breakfast along the way at a cute little Portuguese bakery. We decided to eat our breakfast on the train to Sintra.

The train station located in Rossio Square was designed between 1886 and 1887 by Portuguese architect José Luís Monteiro. The building is beautiful but we didn’t have any time to waste admiring the Neo-Manueline style architecture. We immediately set upon purchasing our tickets just in time for the next departure to Sintra. Train tickets here are dirt cheap at 4,30€ for a round trip.

The ride is only 45 minutes and well worth it if you’re staying in Lisbon for more than a weekend.

Sintra is known for its many 19th-century Romantic architectural monuments, which has resulted in its classification as a Unesco World Heritage site. This becomes apparent as soon as you get off the train.

The first castle we decided to visit was the Palace of Sintra, long time summer home of the Portuguese Royal family. There a town buses that take you from one historic site to the next. However the Palace of Sintra is only a ten minute walk from the train station, so we decided to go there on foot and take in more of the scenery. The paved walkway is decorated with works of art.

The Sintra Palace is on an open square that at the town center. The town houses are quite quaint and very colorful. The pastel colors of pink, yellow and blue really make for a beautiful town. Even in the rain the beauty would simply shine thru. 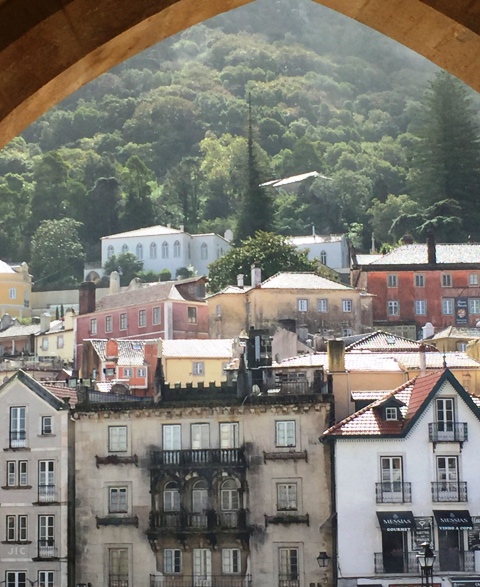 The municipal building of Sintra is a gorgeous example of Gothic architecture. It was constructed after 1154 to house the local administration.

Yes we were unlucky to see the Sintra Palace under cloudy conditions I can only guess it’s that much better under sun shine.

It is the best preserved medieval Royal Palace in Portugal, being inhabited more or less continuously from the early 15th century to the late 19th century. Here are a few shots of the Palace interior. 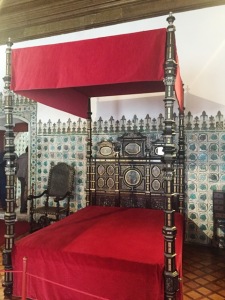 The gardens are beautiful and reminded me of the classical French style gardens. 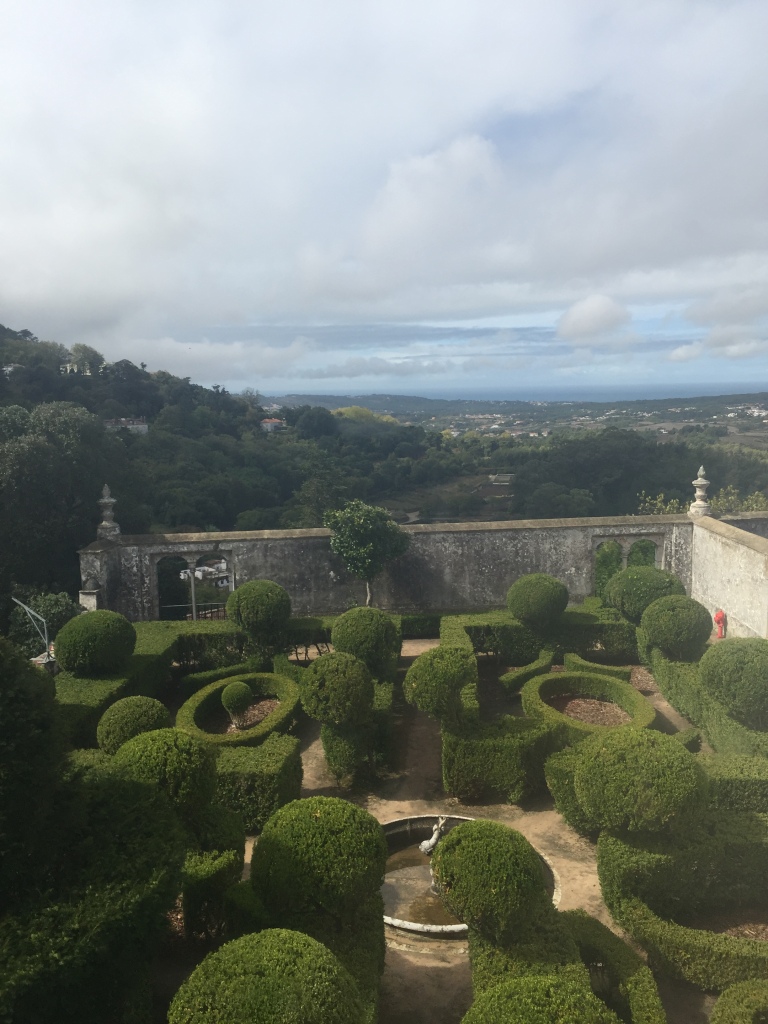 The Palace of course has its own chapel and kitchens.

When we finished the visit it was definitely past lunch time. So we ate sandwiches at a cute little bar : The Byron Bar on the corner of the square. Check it out if you are looking for a quick lunch, the staff is very nice and the food is good.

The second castle we went to visit was the National Pena Palace. This one is on top of the Sintra mountains and while you definitely can hike up there, in the interest of making the most of the limited time we had, my friends and I decided to take the town bus.

Just as Darly mentioned it in her post, the architecture on this one is crazy ! The iconic Pena National Palace was originally built on the 16th century Monastery of Nossa Senhora da Pena, and renovated extensively through the initiative of King Ferdinand II of Portugal.

The Pena Palace is Sintra’s exemplary Portuguese Romantic symbol. The architecture is eclectic, influenced by many architectural styles.  It’s a mix of Moorish style and you can indeed see the Arabic influence quite clearly, Spanish style and of course Portuguese. Or to be more acurate  : the Neo-Gothic, Neo-Manueline, Neo-Islamic and Neo-Renaissance styles.  This palace is one of the most fun palaces I’ve ever visited. You don’t even have to visit the inside to get your eyes full of beauty and history.

Almost the entire palace stands on rock. Structurally, it can be divided in four sections:

There are many turrets and open court yards you can venture into. The guard walk around the towers is fun but not for the faint-hearted especially if you have a fear of heights! As the outer walls are built like a fort one can easily fall to their death in between the battlement crenals.

References to other prominent Portuguese buildings such as the Belém Tower are also present. Here is a view of the clock tower from the Queen’s courtyard. 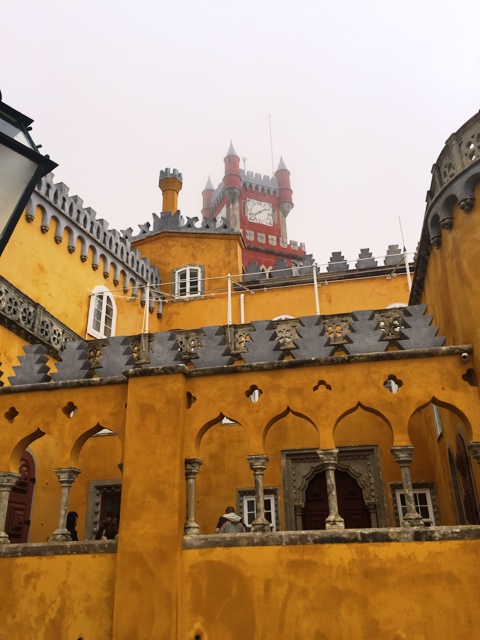 Many elements of the Monastery, for the Order of St Jerome, have been preserved such as the church, cloister and a few dependencies.

The moorish style is evident in this gorgeous entrance.

The interiors of the Pena Palace are beautiful and were designed to be used as the Summer residence of the royal family. It has amazing stuccos, painted walls in trompe-l’oeil and various revetments in tile from the 19th century, forming part of the numerous royal collections. Here are some of my pics that don’t do justice to the beauty of the interiors :

The Pena Park is a vast forested area completely surrounding the Pena Palace, spreading for over 200 hectares of uneven terrain. The park was created at the same time as the palace by King Ferdinand II, who was assisted in the task by the Baron von Eschwege and the Baron von Kessler. The exotic taste of the Romanticism was applied to the park as it was to the palace. The king ordered trees from diverse, distant lands to be planted there. Those included North American Sequoia, Lawson’s Cypress, Magnolia and Western Redcedar, Chinese Ginkgo, Japanese Cryptomeria, and a wide variety of ferns and tree ferns from Australia and New Zealand, concentrated in the Queen’s Fern Garden (Feteira da Rainha). The park has a labyrinthic system of paths and narrow roads, connecting the palace to the many points of interest throughout the park, as well as to its two gated exits. Here is one of the exits : 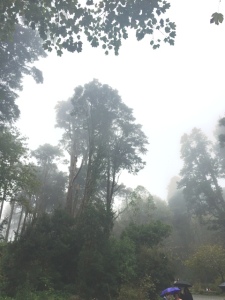 The park was way too large for us to visit properly especially since we wanted to stroll through the actual streets of Sintra and get a feel for the town apart from castle visits. To be honest the rain wasn’t helping us get in the hiking frame of mind :). It made me want to come back though.

Castle of the Moors

After visiting the part of the Pena park, we were all a little tired and decided to forgo seeing the last palace : the Castle of the Moors or Castelo dos Mouros. We only glimpsed it at the top of the mountain. 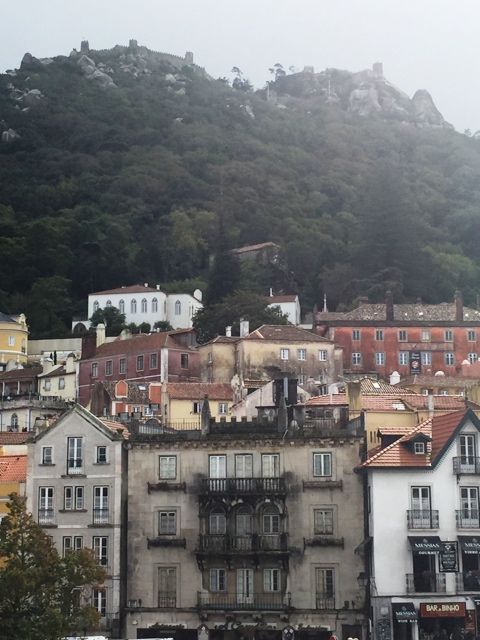 We headed back to the town center and went about exploring it and ambling among its pedestrian roads.

Eventually it was diner time and we asked a lady holding a souvenir shop to recommend a nice typical restaurant. She gave us great advice, steering us away from the touristy eateries to a restaurant located behind the Sintra train station, that we would never have found on our own. 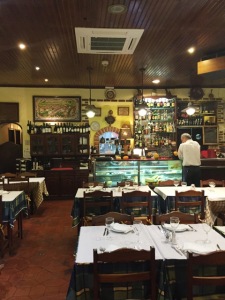 The fare at D. Pippa’s was simple but very good. We took an assortment of traditional dishes : fish, and Portuguese stew. We of course washed it down with Porto! what else? 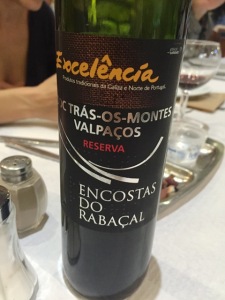 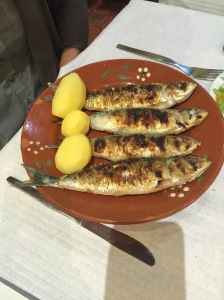 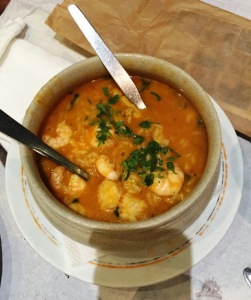 After the hearty diner, we made our way back to the station and boarded our train back to Lisbon around 11pm.

The architects of Sintra indulged every whim and fantasy to create a magical world of fairytale palaces surrounded by enchanted forests. Why not choose pink, purple and yellow as your color scheme? If you are into minimalism or donc like whimsical and fantasy like styles, Sintra might not be the place for you.

However the town of Sintra really is a jewel and totally worth the day’s visit and short train ride. I would recommend it to any one staying a couple days in Portugal.

Have you been ? If so what are your favorite parts of Sintra?