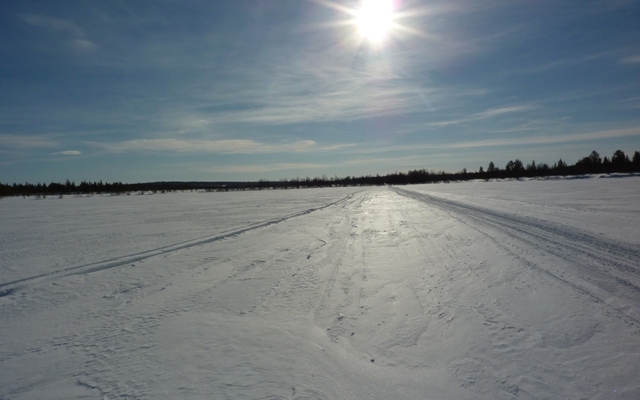 Most everyone has a bucket list, and going on a snowmobile safari near the North Pole was on mine! So when I had the opportunity to discover Lapland in Finland with some friends I jumped on the chance. Finland is only a 3,5 hour flight away from Paris. We went to Hetta which is a small village in the municipality of  Enontekiö. It is situated in the outermost northwest of the country and occupies a large and very sparsely populated area of about 8,400 square kilometers or 3,200 sq miles between the Swedish and Norwegian border.

We arrived the day before but with no jet lag to worry about the first thing on our list for our first full day in Lapland was a snowmobile safari.

After a hearty breakfast of cheese and smoked fish and bread we set out for an entire day of snowmobiling. The day was gorgeous if a little cold! Ha who am I kidding it was freezing but the hotel provided us with special suits that were really good at keeping us warm. As an added precaution I had brought heating pads with me that I purchased prior to my departure. If you’ve never experienced extreme cold you might not know how well your body will adjust. I’m not a person that gets chilly often but better be safe than sorry. 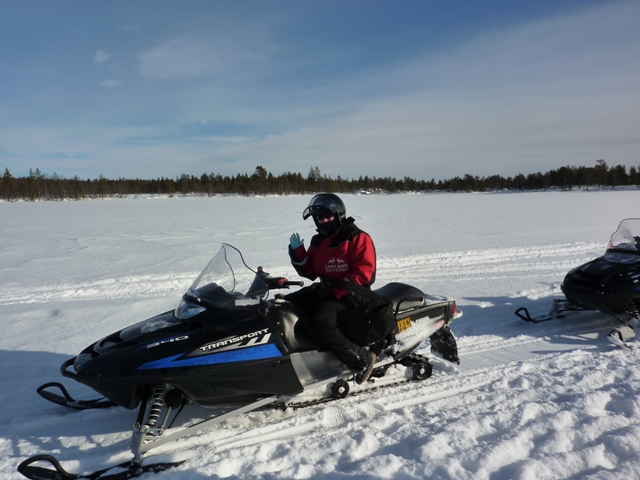 Even though the sun was up and shining the quality of the light was interesting and not what I was used to closer to the equator line. The light had a dreamy quality to it and the sun never rode very high in the sky.

I’ve never been on a snowmobile before so I admit to being a little nervous. It is actually pretty easy is you stick to basics. Our guide warned us not to stray from the path unless he told is it was ok because you need to master the technique of driving over powdery snow. The path snow had been packed by a snow truck or just by the many passages of other snowmobiles so you aren’t at risk of sinking or over turning. Well when you’re in a group there will always be the ones who don’t want to follow the rules and sure enough a couple of them got stuck and one even had his snowmobile overturned when they left the beaten path! I’m good with following the rules most of the time but in this occasion I didn’t want to brave it out when I’d never ridden one before.

The snowmobiles handles were actually heated and that’s a feature I definitely learned to appreciate. Because after driving for a while it can be a little cool. The vegetation was pretty sparse.

We drove through a forest for a while and then we hit a huge valley with not a tree to be seen. I thought it was just a very big meadow but our guide told us it was actually a frozen lake. No wonder trees didn’t grow here. I would never had guessed just looking at the landscape ! He said we could experiment with speed and go all out not having to follow a path any longer. I went for it but in the back of my head, I was like I hope the water is frozen good! It was exhilarating going so fast in this desert of ice so far away from city life. I felt really free. 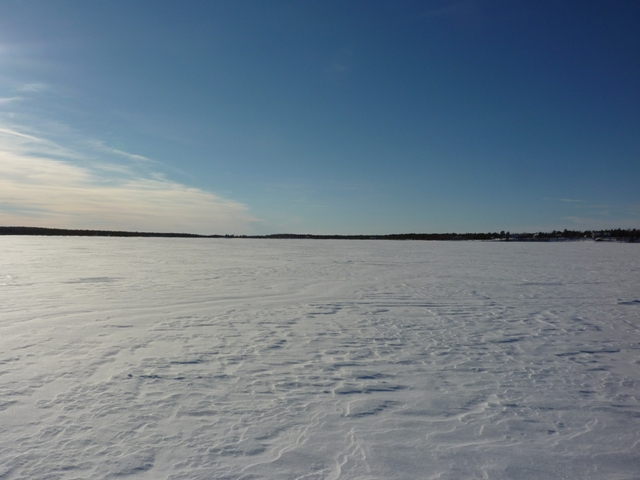 Unfortunately the lake though big wasn’t endless and too soon we had to get back in line and take the packed path into the woods again. Already it was lunch time, when we happened upon an Igloo hotel virtually in the middle of nowhere.

The guide said we would be eating here. It was so cool to go inside a real igloo! The temperature was definitely milder than outside and that’s really funny to observe even if I’d read about it before. However it was far from balmy inside. 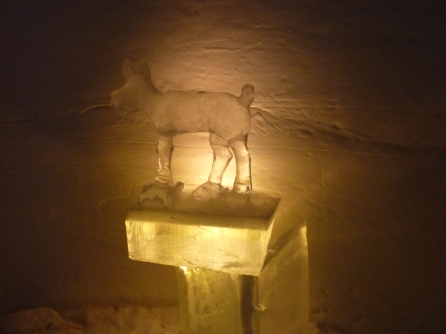 Even some pieces of furniture were made out of ice! We took a tour of the place before settling down to eat in the dining room. The hotel staff told us it cost a 100€ to sleep there overnight. 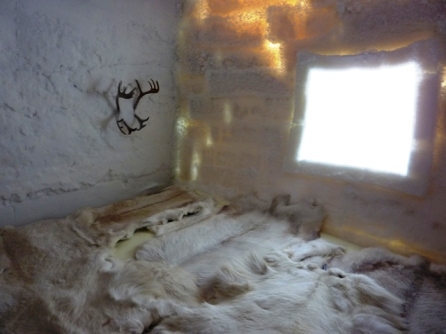 When I saw even the beds were made of ice, I was like no way! I love adventure but I’m not a huge fan of roughing it! First of all ice is hard, and there was no mattress only a couple of deerskins slapped over the ice slab. Second of all ice is cold. And did I mention it’s COLD?

The dining room opened on the kitchen with a counter in between. It was the warmest room in the Igloo thanks to the fireplace. The stools were made of tree trunks and the tables were made of ice. We were given soup and it was heavenly. The cold really made me ravenous and I would have eaten and enjoyed most everything. 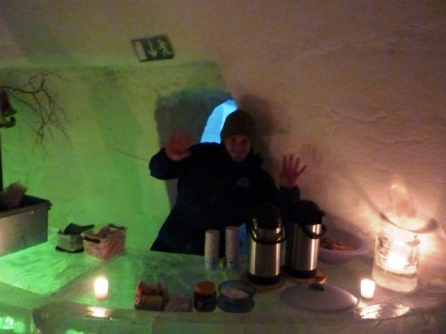 After a nice cup of warm coffee I was feeling restored and ready to get on with the day. But first it was time to take care of nature’s call because as I had witnessed during our safari going out in nature to pee is no fun when it’s freezing. As it was, the outhouse naturally was out of the igloo and of course not heated, let me tell you your butt cheeks will sting! haha but at least you’re not in the wind behind the dubious cover of a snow hill or a tree.

We all hopped back onto our snowmobiles and continued on exploring the wilderness of Lapland. The scenery is truly gorgeous and the air felt so pure. I didn’t see any wild life, it felt like we were the only human beings on the planet and that’s a feeling to relish when living in an overcrowded megalopolis!

Around 3 pm the sun started to go down and it was time to head back to the hotel. Dusk lent beautiful colors to nature and it was a shame to have to head home. However once the sun dropped so did the temperatures even though before that you’d think the sun wasn’t doing much of anything against the cold.

All in all it was a magical experience and I would recommend it to anyone. The vast silence and landscape makes you realize just how small you are in the face of nature and the grand scheme of things. Even if you know it, your gut definitely feels it in Lapland. Your problems will appear a lot smaller.

What item was on your bucket list that you’ve managed to do or plan on doing?